OFFERINGS TO THE PATRON DEITY BEG TSE, AND HER ATTENDANTS

Tibet, 19th/ early 20th c.
76 x 76 (115 x 90) cm
This rare and detailed depiction (kang dzä) shows all the clothing and equipment of the deity Beg tse, and his companions. The deity himself and his companions are not depicted, they are mentally projected into their garments during meditation. Beg tse, this fearsome demon - formerly probably a pre-Buddhist (war) deity of the Mongols, known as Beg tse (lCam sring), "brother and sister" - became, in the second half of the 16th century, the last of the Dharmapalas, the protector of monasteries and guardian of sacred objects by oath, and revered as a mindful guardian of the faith. He mercilessly persecutes all those who have broken their vows or disregard the sacred dharma. His task is to destroy and exterminate all those who violate the victorious teachings, according to the mission he received from Buddha. In a legend A. Grünwedel. reports about a journey of the 3rd Dalai Lama, (bSod-nams rgya-mts'o) to Mongolia - on invitation of Altan Khagan the present powerful ruler of the Tümäd - about the defeat Beg tse suffered when he wanted to prevent that journey of the Grand Lama. Altan Khagan, had sent envoys to Tibet in 1566 to invite the rGyal-ba of Lha-sa. Only after the second invitation in 1575 did the Grand Lama decide to come himself. At Kökö nor a vihara was to be built; there a delegation of the allied Mongolian princes awaited him. From everywhere believers came to meet him, bringing rich gifts. One evening a threatening crowd of Mongolian gods and demons appeared in magical transformations as camels, horses, mice, etc. under the leadership of the demon Beg tse. The rGyal-ba of Lha-sa, however, banished them, whereupon they took an oath not to harm the religious. The figure of Beg tse (the name means "hidden armor") is powerfully stocky, of energetic movement, and his face wrathfully agitated. He wears rich armor in Central Asian style and Mongolian boots. Over his armor, he wears a silk cloak that "hides the armored shirt." With his right hand he wields a sword with a vajra hilt and on his left he holds, along with an arrow and a bow, the heart of an enemy he is ready to devour. A vajra spear with a red pennant is additionally held by Beg tse in his left hand. Like all Dharma protectors he wears the fivefold skull diadem in front of his fiery, red surging hair. A skull necklace with (here) seven large freshly chopped off human heads hangs down from his neck, indicating the overcoming of negative qualities. The deity moves in lunge on a sun lotus, amidst a wave-swept lake of human and horse blood. With his left foot he stands over a human being, and with his right over a horse's body. On the right side of the deity Beg tse appears his sister on a black bear. Opposite her rides the red "General", or the red "Master of Life", on his mount, a blue wolf. In addition, Beg tse is accompanied by six assistants called "butchers" who also wear skull crowns and stand on human skins. Among the offerings to the deity are the seven symbols of a world ruler, a monk (l), a black hat magician (r), animals of various kinds, birds carrying organs in their beaks, clothing, weapons, musical instruments, skull bowls filled with various substances, and human organs hanging from the edge of the picture, as well as human intestines. In the center below is a large torma on a kapala carried by three human heads, above a spread tiger skin. All these are offerings and gifts to the powerful protective deity Beg tse. Tempera on cotton fabric, original brocade frame with silk flounces, inscription to reserve.
German private collection, collected in the 1970s/80s.
Cf. A. Grünwedel, Mythologie des Buddhismus in Tibet und der Mongolei, reprint of the 1900 edition; Osnabrück, 1970: 80ff; R. de Nebesky-Wojkowitz, Oracles and Demons of Tibet, Graz 1975: 88ff.
Minor traces of age
Bidding
previous lot Catalogue next lot 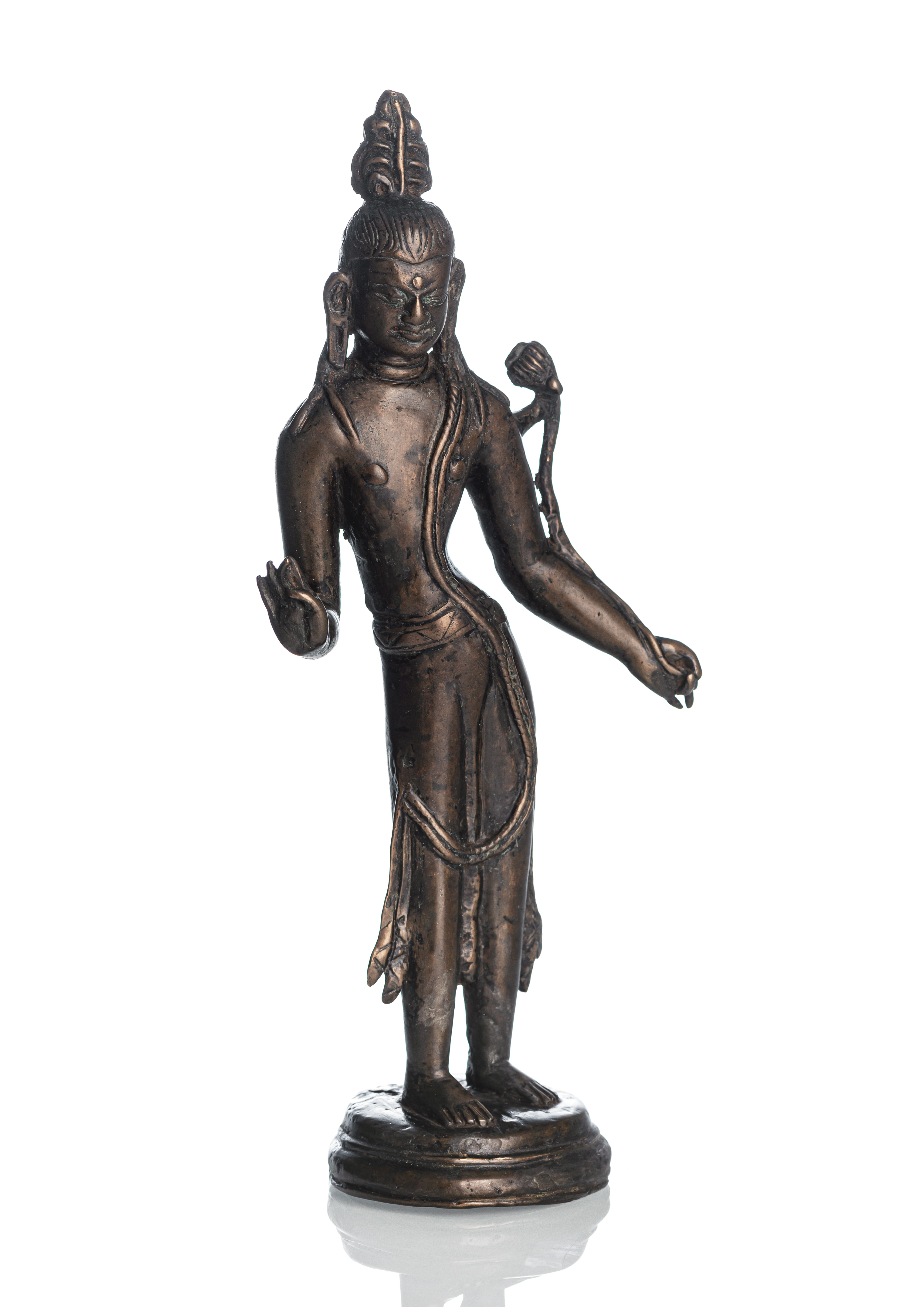